What is iOS Development?

In addition to guest posting on the UpCity blog, iTechnolabs is featured as one of the Top Software Development Agencies in Canada. Check out their profile!

Developing apps for Apple’s mobile operating system, which powers the iPhone and iPod Touch, is known as iOS development. It is quite similar to other software or application development varieties in this basic sense, but there are also some significant distinctions.

Google’s Android and Apple’s iOS are the two leading players that control the smartphone OS industry today. Android is open-source, but iOS is only available on Apple systems. As a result, there is another significant distinction between creating iOS software and software development for other platforms: Swift and Objective-C, two programming languages that are mostly utilized within the Apple ecosystem, are employed by iOS developers. Swift was created by Apple exclusively for iOS and is a more modern innovation than Objective-C, which has a history that dates back to the early 1980s and is a member of the same language family as C and C++.

According to the most recent StatCounter statistics, mobile devices account for up to 56% of all internet connections, surpassing tablets and laptops. Furthermore, according to the same data, 27% of these devices are iOS devices.

Before you begin, you should think about why you choose to create your app and attempt to respond to a few straightforward questions, such as:

When you have the answers to these queries, it will not only be simpler to convey them to consumers, but you will have a better grasp on future possibilities.

You must keep in mind that not every iPhone user upgrades their operating systems regularly. As a result, if, for instance, your software is only supported with the most recent version and your customer is still on their earlier version, the user may get frustrated and remove the app right away.

Because of this, you should concentrate on making your application compatible with all likely system versions. Or look for an expert iOS app development company that does that for you.

After successfully implementing the first two steps, it is time for the last step. It must be comprehensive and include all required information.

What are the requirements to build an iOS App?

You don’t have any coding experience but want to build an iOS app yourself? No problem; follow the guidelines mentioned below and get started.

First, make sure your Mac is set up 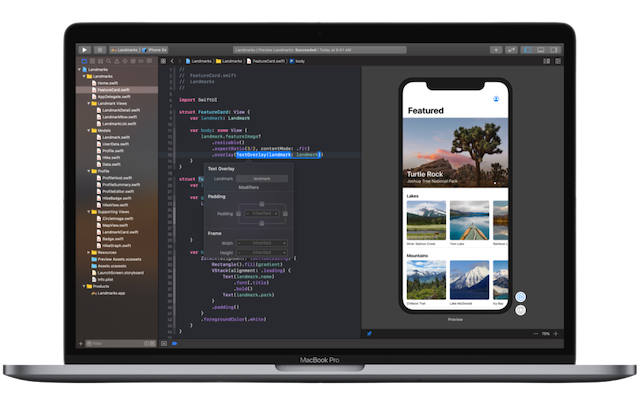 Keep in mind the basic rule of the iOS App. Apple has a closed ecosystem, unlike Android, which is an open ecosystem. The devices built by Apple can run only on iOS. 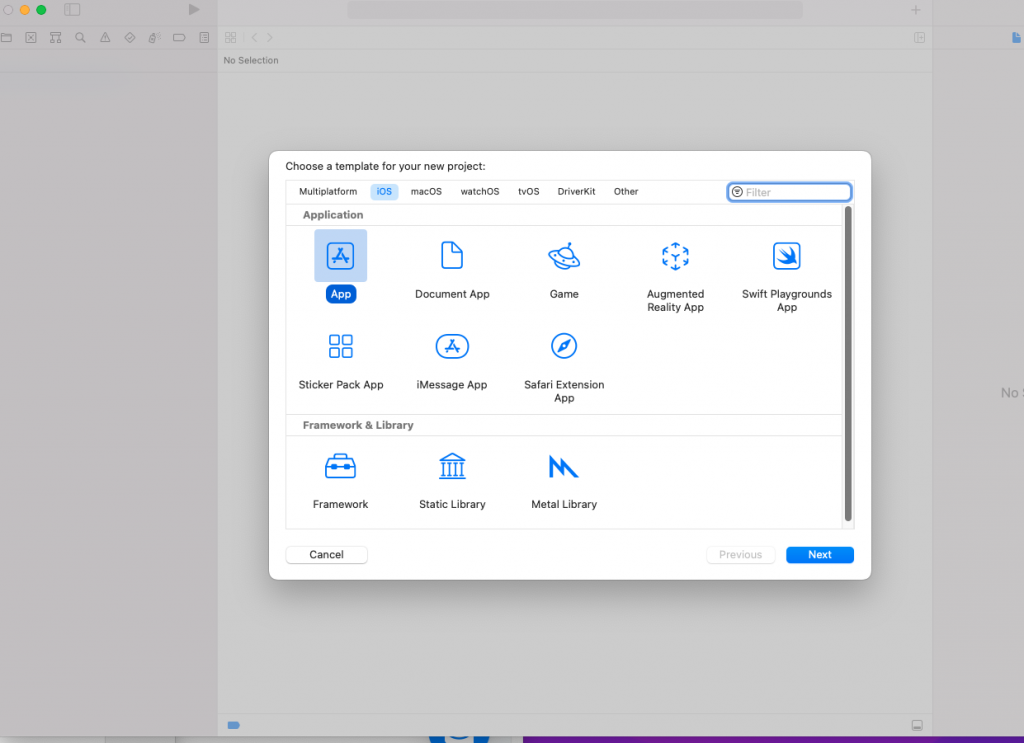 You will be able to create iOS apps. With the help of IDE by Apple Xcode environment, you will quickly develop the app. You will get debugger tools and iOS SDK as source editors. 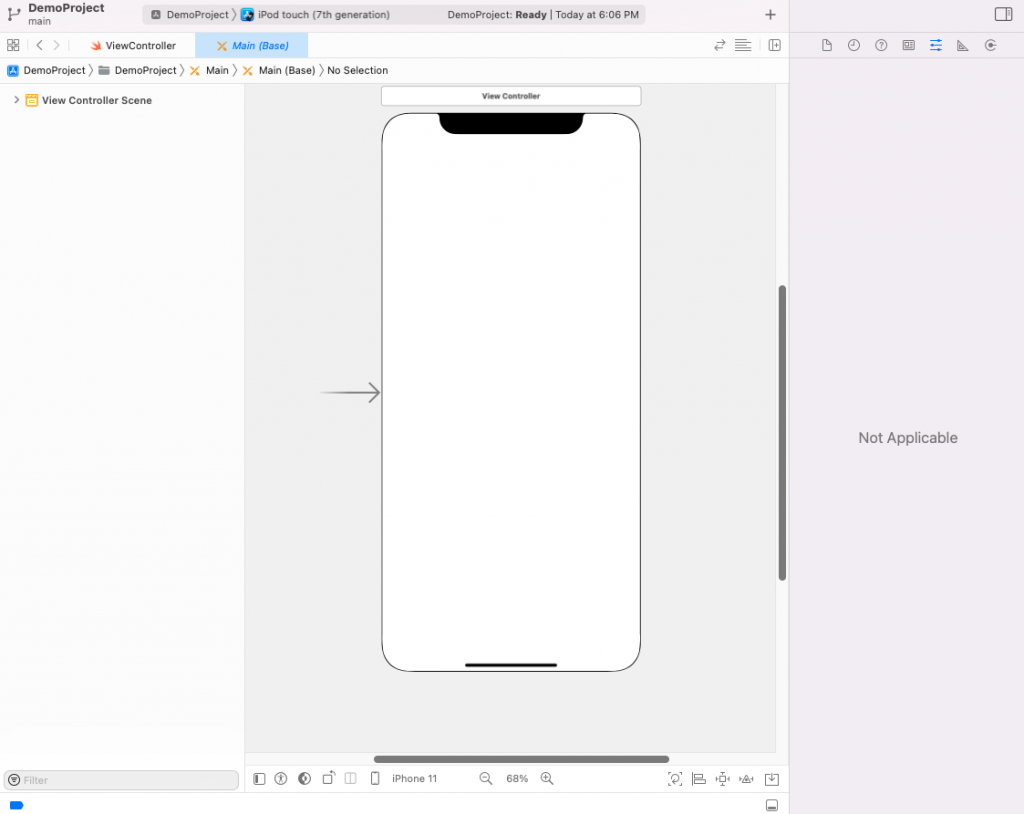 Click to start Xcode right away. Select the option to launch a new Xcode project to create a new project. The next step includes clicking on ‘Single View App’ as the project type and then clicking on the icon,’ Next’. It will have a storyboard and one view controller. 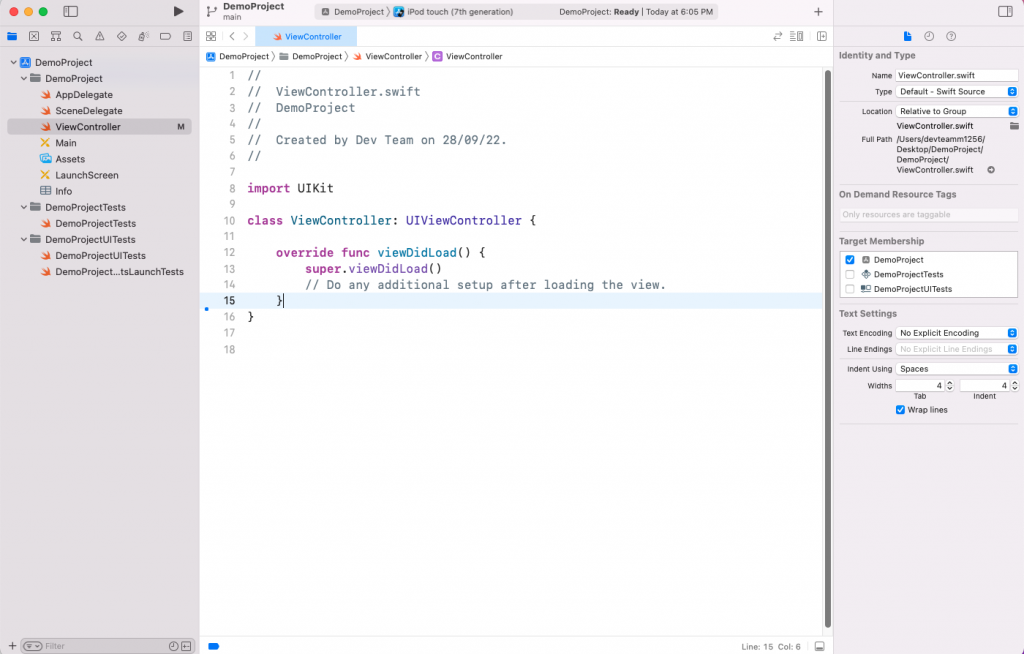 Open the Xcode screen. Now from the left corner in the upper section, disable the Run/Stop button. Now select the location of the device or simulator. You can either press Command + R or click the ‘run’ button to launch the software.

Why Does Your Business Need An iOS App?

With the increasing use of iPhones, iOS is one of the most popular platforms(Android being the other) used by any iOS app development company to launch an iOS App.

First and foremost, businesses analyze their target markets to investigate them based on certain criteria, such as the percentage of smartphone users in specific cities, states, or nations. Numerous users of Android or iOS exist, and the most popular app genres include games, entertainment, education, wellness, and many more. Age group, literacy level, socioeconomic status, and many other factors are equally crucial when creating in-depth analytical reports taken by any iOS app development company. Once you identify your target market, selecting the platform that will help your company expand becomes simple for you.

An organization develops its app to offer superior customer service. The company’s relationship with the client is directly proportional to how compatible and entertaining the app is. Customers of Apple products have long lauded the controlled atmosphere of their products.

Additionally, they appreciate the simple and fun UI of iOS apps. These features might increase user appeal and increase app sales for the brand.

Android users dominate the smartphone market by approximately 75%, but they do not translate as the most dominant paying clients. Apple is winning by a mile, at least regarding users who pay for an app.

An iOS app development company must pick a platform with additional fascinating features that offer consumers the highest level of privacy when designing an app. The aim is to protect iPhone users from vulnerability to outside forces and viruses.

Stages for Building an iOS Application 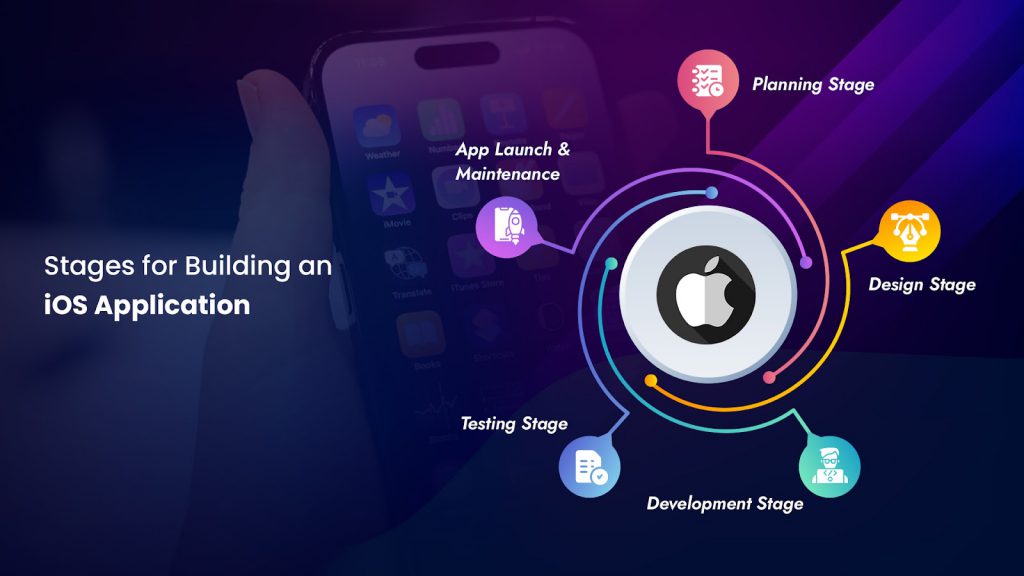 It takes more than just building a mobile app and uploading it to a store to develop an app. Planning, doing the homework, possessing the necessary abilities, and, most importantly, laser focus is required for the process. The app development business must adhere to the following development stages to guarantee the success of the finished product.

Before releasing an app, it’s crucial to have a real direction on what problems it will address, its primary audience, what features it will offer, etc. Additionally, thorough market research is necessary to ensure the app will be relevant in its niche. The planning step also entails gathering all the requirements in the app development process’ later stages.

The design stage is where the UI/UX, user experience, appearance, feel, and navigation are developed. Developers of mobile apps then use the design.

This stage of the development workflow aims to transform the existing design into a usable app.

Testing the application is required once the iOS App development company is done with the development. QA engineers examine the app to ensure it runs bug-free without a hitch.

The prototype must be tested and evaluated before being realized to the general public. The phases in the construction of an app do not, however, finish here because every application needs frequent updates to keep up with the rapidly shifting needs of the user base. Thus, this stage heralds the start of a new cycle of growth.

Skills To Check Before Hiring An iOS App Developer

The developers must understand the functionality of iOS applications on all Apple devices, such as the Apple watch, iPhone, iPad, and Apple TV. They must also maintain the code, guarantee the app’s quality, address problems, and assure application upgrades in addition to developing apps for iOS devices.

Prerequisites For Hiring An iOS Developer To Build Mobile Application

Through outsourcing, it is possible to hire iOS app developers worldwide rather than simply in your neighborhood. In-house team members may also be more adaptable and simpler to manage.

You may look for iOS app developers for hire by consulting partner recommendations or visiting reliable websites for remote hiring (like Upwork and GitHub). When you hire a freelancer, your company project manager communicates directly with a developer who is located elsewhere. In this scenario, the developer joins a traditional team and virtually participates in meetings.

Outsourcing business manages the entire project you’ve given it. There is one great upside to outsourcing, though. The most frequent problems that may be outsourced to an outsourcing business include design, tech stack, continuous support, full project supervision, and quality tracking.

As a member of your full-time internal department, you can also employ an iOS developer. To increase department efficiency, you’ll need to pay them a full-time wage (or part-time, per the prior agreements), make sure to monitor their work, and train them efficiently. 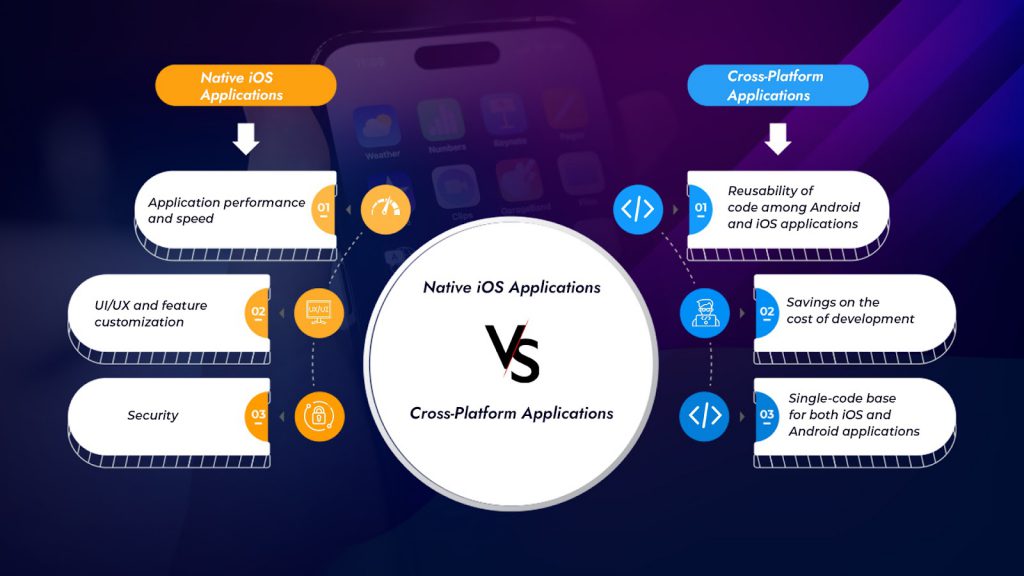 It fundamentally is the procedure for developing a platform-specific application. Native app distribution across multiple platforms is still an option, but doing so demands independent, frequently concurrent development processes for each platform.

Because there are no constraints between the variants of the program from various operating systems, native apps are more straightforward and quicker to build or adjust.

Building an application—typically a mobile app—that can run on many platforms from a single source code is known as cross-platform development.

Reusability of code among Android and iOS applications

One of the main advantages of cross-platform creation for most developers is using a single codebase for both iOS and Android apps. Native apps require separate code writing for several platforms, often done by two independent engineers or teams.

Savings on the cost of development

Building cross-platform apps may cost up to 30% less than designing iOS and Android apps separately since just one development team is required, as opposed to at least two.

The single-code base for both iOS and Android applications

One of the main advantages of cross-platform programming for most developers is using a single codebase for both iOS and Android apps. Native apps require separate writing of code for several platforms, which is often done by two independent engineers or teams.

Learning and practicing tons of tech ideas and abilities are required for iOS programming. Although initially intimidating, it’s a rewarding road to follow. IOS application development will only grow with time.

The information mentioned above will help you achieve your objectives, whether you’re an iOS app development company or a budding developer. This will enable prospective developers to estimate the time and effort required to perfect this development. It will assist business owners in deciding when and why to hire an iOS app developer to maximize their revenues. 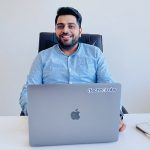 Pankaj Arora is the founder of iTechnolabs Inc, Canada. As a strategic thinker and visionary professional, he diligently faced multiple challenges and took up lots of opportunities in the pursuit of professional excellence, and handled operations of mobile and digital payment companies.

Being updated with the latest development trends in technology and using the tools of automation, he strives to lead businesses to the next level and offer a reliable mobile app and website solutions.

Understand the upcoming mobile apps trends–for both Android and Apple IOS–and how you can keep up with them.

END_OF_DOCUMENT_TOKEN_TO_BE_REPLACED

Table of Contents Make Your Decision Based On Your MVPDefine Your DemographicDon’t Forget Your MVP Is A TestCheck Out The CompetitionThe Challenge With Cross Platform App DevelopmentMake a Decision In addition to guest posting on the UpCity blog, Cider is featured as one of the Top Mobile App Developers in San Francisco. Check out their profile here. Whether you are developing […]