How Long Does It Take To Produce A Video Production Project?

In addition to guest posting on the UpCity blog, BuzzFlick is featured as one of the Top Corporate Production Agencies in the United States. Check out their profile!

Videos are now an integral aspect of every successful marketing campaign. More importantly, videos are essential to the success of any business, no matter how big or little.

Due to the growing popularity of online video and the increasing importance of reaching customers through this medium, the number of companies offering video production services has increased.

Producing a video isn’t a piece of cake. It takes a good production strategy, a lot of patience, creative charm, and plenty of faith.

It is crucial for organizations to generate videos that are of outstanding quality in a little period and can help them enhance conversions and ROI.

A wide variety of corporate video formats are available. Explainer videos, 2D animations, motion graphics, etc., are just a few examples. The length of the videos produced should reflect the needs of the company.

But here comes the billion-dollar question, “How long will it take you to complete the entire project?”

Pre-production, production, and post-production are the three distinct phases of any video production process. Not to mention, this is what the entire project’s deadline will revolve on.

In this article, I will describe each stage of the video production process in detail so that you can grasp the big picture.

But before we get into it, let’s answer the two most crucial questions that everyone has about every project: how much will the video project cost, and when will it be finished?

The answer to how long it takes to make a video from beginning to end is the same as that for how much it costs: it depends.

Ideally, four to eight weeks should be allotted to finish the production of a 60-second live-action corporate video that includes interviews, an animated motion graphics video, and a b-roll video.

However, it’s a proven fact the simpler the project is, the less time it takes. Let’s take a look at what goes into a video production process during those four to eight weeks of tenure.

The Universal Chronology for Producing A Corporate Video (The Timeline) 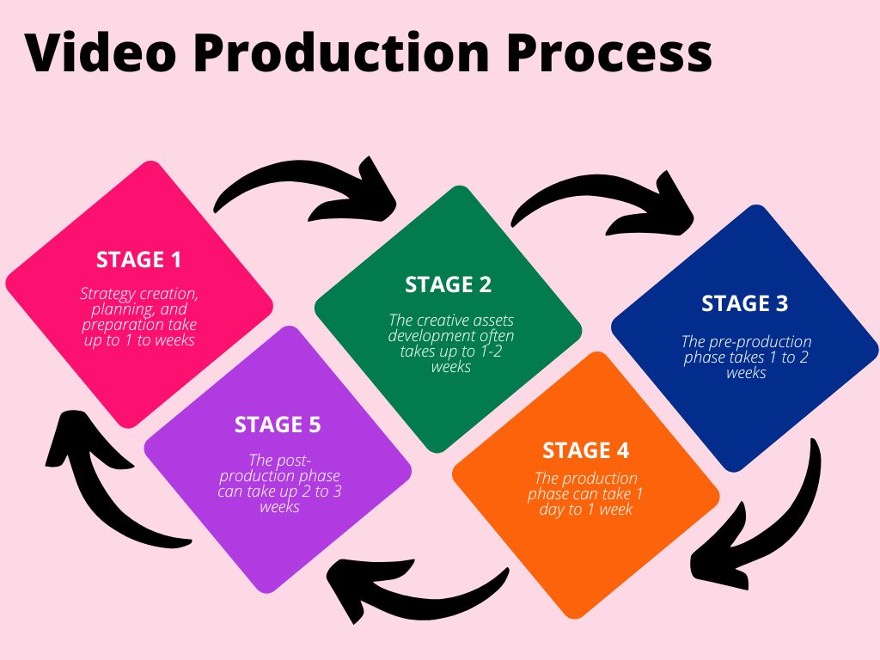 This sums up what all goes into a video production process and which stage requires what. 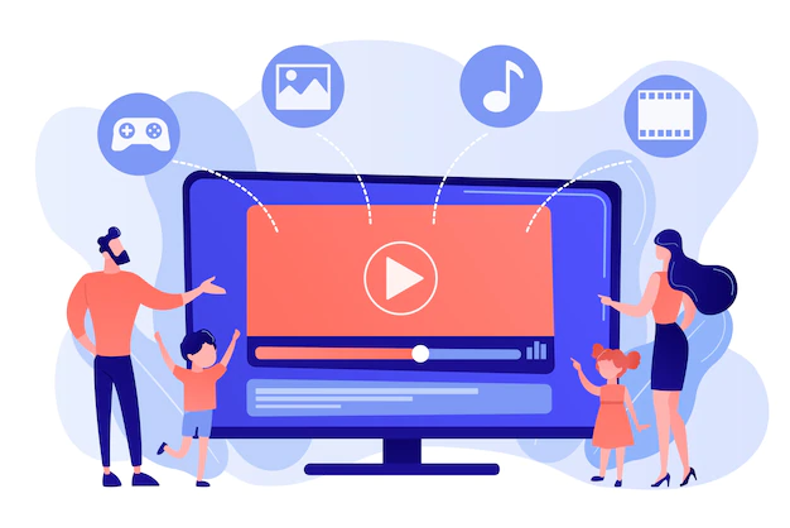 So, let’s go back to the beginning when contracts were being made for the project. The first step in making a good video is having an intake meeting with the client to find out exactly what it is they want to achieve with the final result.

Thereafter, the organization comes up with an inventive messaging brief that serves to explain key aspects of the project. It’s a simple yet crucial method of maintaining order and harmony throughout the video production process.

The agency seeks to collect the right information as much as possible in these briefings so that it may plan the necessary creativity and allocate the necessary funds. What kind of video you want to make (story versus interview-based, location versus studio, voice-over artist, professional actors, etc.) will be among the topics covered.

Timeframes are very variable depending on the aforementioned factors; however, it is estimated that this procedure can take up to a week.

After the video production company has established the parameters of the project (cost, duration, desired outcomes, etc.), it will enter the creative creation phase. 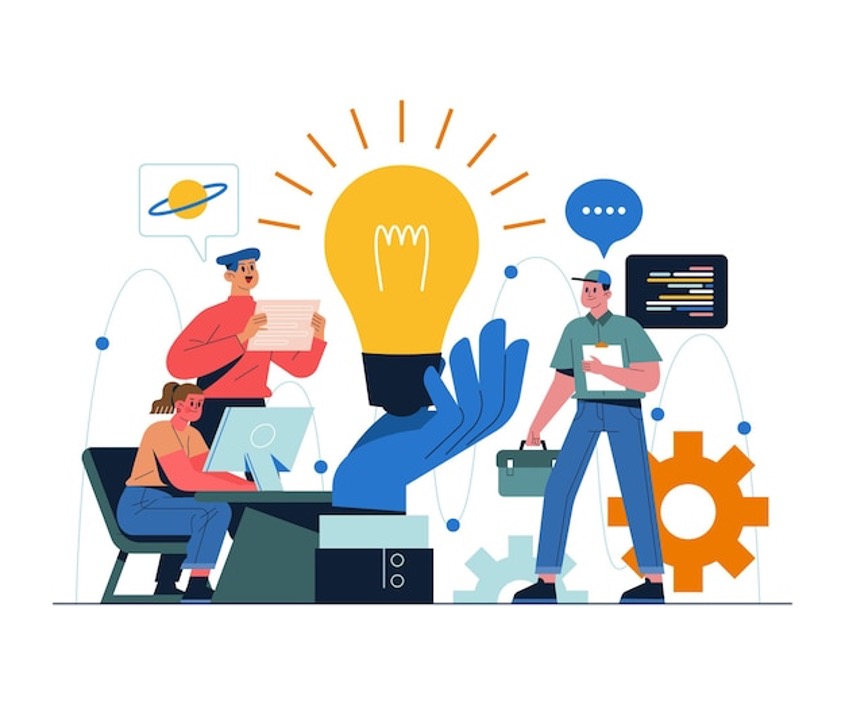 How do we define creative development? The inspiration behind your video is the most significant element. Oftentimes, the success (or failure) of a video project hinges on the strategy you employ to create it. This might take a few days or up to a week if everything goes perfectly.

If the video consists entirely of interviews, that time period will be shortened. Since the creative strategy already incorporates our current understanding of the project’s aims, target demographic, and central message, it needs not be fully developed before proceeding.

The idea may be to make a training video in the style of a reality show or to film an interview so that it seems like a documentary. After settling on a certain piece of creativity, you’ll go through the following stages.

There are a lot of phases in this process, and the length of time needed for each is entirely according to the method being used for creativity.

Pre-production always begins with the screenplay, no matter what creative technique is being used. A week is a good amount of time to write the script, collect comments, and make changes before finalizing it. Timeliness might increase if the customer needs “legal” assistance.

In the event that your video will have design and motion graphics for instance kinetic text, then the style frames will need to be made to demonstrate how the motion and graphics will be implemented. This can happen in parallel with the scripts and take anywhere from a couple of days to one week or so.

Casting professional actors is a must if your show has a storyline. Many production companies may also have rehearsals with the actors ahead of time to assist them in perfecting their performance for the big shoot day.

Pre-interviews serve the same purpose as filming an interview-based video: to hone the performance and guarantee that all relevant material is recorded.

The location of your video’s filming is something you’ll decide on during the concept creation phase. Once you’ve settled on a place for it, you’ll need to do some scouting to make sure it’s perfect. The ideal site may call for special permissions; plan ahead to ensure you have enough time to get all the necessary authorizations.

Once you have all the aforementioned materials prepared, you can move on with setting up your shoot. To do so, the production crew, on-air talent, the client, and the shooting site must all agree on a convenient time.

The photography director/producer will create a shot list to guarantee that all necessary elements are captured during principal photography. Also, numerous shoot locations or interviews necessitate the use of shot lists.

All of this can add another two weeks to the process, and we’re still not at the shoot date yet. 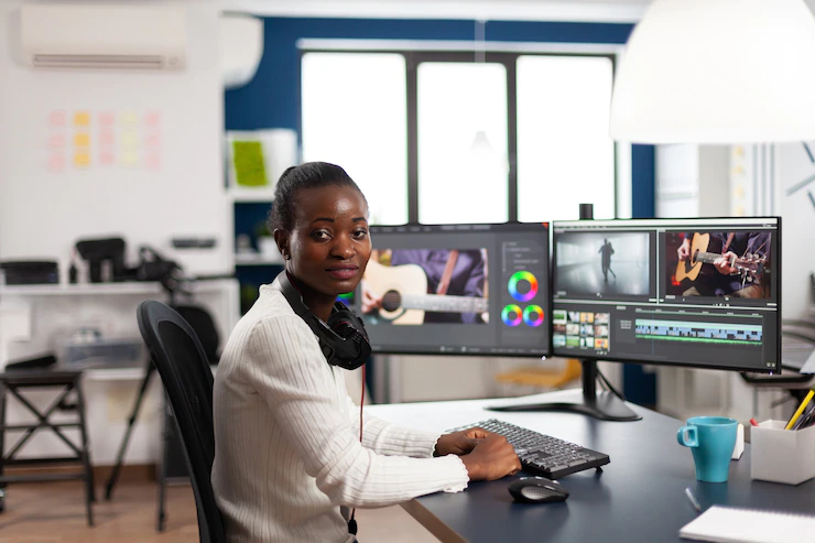 The production process is complete when you’re ready to begin taking pictures. We will know how many shooting days we need once we’ve completed our pre-production and are ready to start production on the things included in our creative development plan.

Depending on the format, videos with narration or interviews might be shot in a single day. Some people like to give it five. Setting out a week for production is a solid bet, whether planning or pitching. 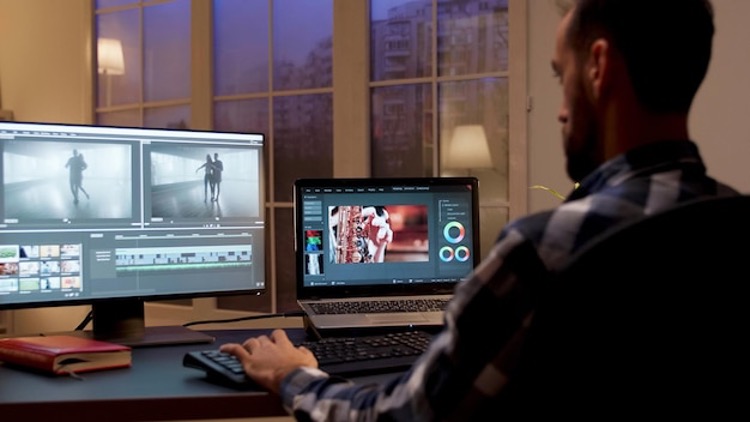 After shooting all of your footage, it’s time to edit the footage together. Post-production entails a number of stages, similar to those of pre-production:

Whether your video is a structured story with several takes and multiple locations may affect how much time and effort is needed for processing the material.

The time it takes for a production team to process an image with a greater resolution, which improves its quality, depends on the processing speed of the computer system being used to download it.

The video goes through numerous edits, much as the writing did. It usually takes around three to four days to complete each iteration, or revision, of the editing process. However, if there are several interviews, or if your subject wasn’t comfortable in front of the camera, that editorial might take more time.

It might take more time to edit the video into a coherent whole if, for instance, it contains many pauses, interruptions, and odd language.

Casting and recording voice-overs If your video needs narration, you’ll need to hold auditions, find and employ voice actors, then record the dialogue.

If you’ve been working on storyboards in the pre-production phase, it’s time to start animating your motion graphics.

When it comes to audio, the sound design process is the last to be completed after production. Included in this process are the narrative, sound effects, and music, all of which will be mixed and mastered into a single cohesive whole. The ultimate playback device is considered during the audio mix.

There are significant differences between mixing audio on the web, mixing for broadcast, and mixing for a live performance. As a result, it’s important to take your time and make sure the music fits the tone of each location.

Post-production on our benchmark two-minute promotional video should take no more than two weeks.

Finally, we reach completion, which includes taking into account accessibility factors. At this stage, a video has already been greenlit. Here, you’ll take care of things like final QA (quality assessment) and exporting to the final deliverable files, as well as accessibility issues like creating audio tracks, closed captions, and creating any subtitles if they are required.

The time frame for this procedure often ranges from a few days up to a week. However, this obviously depends on how many of the above-mentioned prerequisites are needed.

When some videos take a couple of weeks to produce, some video projects might take more time than you anticipated in the beginning. But why so? Well, the video production process is primarily determined by the following three criteria:

The type of video

There are numerous types of videos available. You can choose different styles such as live videos, animated videos, explainer videos, and so on.

All you need is to remember the more you add special effects and other elements to your project, the more time it will take to produce. For instance, it does not take very long to produce a live-action video as no post-production work is required.

The length of the video

Well, it goes without saying, lengthier videos take longer to produce when compared to shorter videos. This signifies that your video timeline varies on the video length.

The style of the video

The timeline of video production is also influenced by the video style. For instance, if you’re producing a talking-head video, you need to film a couple of continuous shots.

While on the other hand, if you’re shooting a documentary, you have to film a couple of shots from multiple areas and locations. The more photos you add to your video, the longer it will take to produce.

As the demand for video marketing is increasing, so are the conversions and ROI. If you have not jumped on this bandwagon yet, it’s high time!

On a closing note, we hope this blog will help you to understand the whole process of the video production process and how much it can take to produce a video. 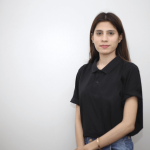 Author Bio: Hijab Fatima is a full-time creative digital content creator. She works at BuzzFlick, a video animation company that offers prolific motion graphic services. She loves to showcase her creativity through her writing. In her free time, she watches Netflix and reads Jane Austen.

Shooting in 4K or HD Post-Pandemic?

Discover practical tools on when and how to decide whether to shoot in ultra-high definition for your next video project or not.

END_OF_DOCUMENT_TOKEN_TO_BE_REPLACED

How Much Does It Cost To Edit A Video?

END_OF_DOCUMENT_TOKEN_TO_BE_REPLACED

What Are the Benefits of Video Marketing?

Digital marketers have been discussing the benefits of video marketing for years. Discover the data and statistics that back up the ROI video marketing can provide for your company.