In addition to guest posting on the UpCity blog, GrowME is featured as one of the Top Digital Marketing Agencies in Canada. Check out their profile!

Many startups and small businesses that want to grow their company usually face minimal options: take a loan from the bank or provider, or look for venture capital.

While the former is quite common, it can be challenging to obtain, and the funds are limited.

For the latter, it’s widely promised to be the saving grace for many businesses (Facebook famously started with an angel investor, and look where it is now).

But honestly, when 75% of venture-backed startups fail, it highlights more cons than pros when it comes to venture capital.

So what’s the solution then for growing businesses? What’s better than investing with a VC?

It’s forming a partnership with a marketing agency.

Before we get to that, let’s take a look at the disadvantages of venture capital.

The Pitfalls For Venture Capital

It’s important to note that while there are some perks to working with VCs (venture capitalists), there are many clear-cut disadvantages:

The biggest issue is the loss of ownership through equity.

As stated by Finmes, “with venture capitalist funding, you may have to compromise on your goals”.

Instead of having total control of your business, you’ll find yourself with limited decision-making abilities. Every company decision has to be discussed with the VCs – from marketing strategies to which department to invest funds – which can lead to arguments about its direction.

Take it from a VC itself: Eric Paley, the managing partner at the VC firm Founder Collective, says that VCs can push you to “sacrifice a viable present for an improbable future” or force “startups to grow fast at all costs”.

The worse thing is that if you have problems, you can’t fire the VC. They funded you, so you’re stuck with them.

There will be specific terms and agreements you have to meet to obtain the funding or expect to lose it.

An example could be “an expected timeframe for ROI”. Tech Republic stated that VCs “consider seven years the average age for ROI”, with the NVCA backing the claim up, suggesting that “the median age for IPO was seven years old”. If you don’t show an ROI before a deadline, your funding could be pulled.

They could also be other limits, such as restricting investment from other VCs or partners, meeting marketing quotas or “rights of first refusal” – meaning they can refuse to sell the business in future.

You have enough pressure running your business itself, let alone meeting additional agreements on top of your shoulders.

Having a VC on board doesn’t mean having a partner to support you. LinkedIn sums up the investor mentality perfectly:

“An investor puts money into an investment with the hope that they will get a return on this capital. They sit back in a passive role and allow you to run the day-to-day operations. They may, from time to time, get updated on how the investment is doing. They have every right to know if their money is getting put to good use and if their investment is growing.”

For your business’s growth, you want a partner that will support you and enhance your company.

It’s here that forming a partnership with a marketing company can trump all these disadvantages, offering you a better foundation to build your business.

What Is A Marketing Partnership?

According to Search Engine People, a marketing partnership is “a smart collaboration of two or more organizations with the intent to develop a mid-term or long-term marketing program designed to meet each of their respective business goals”.

While this might mean two companies working together, we’re focusing on a new-age model that helps startups and small businesses: partnering with marketing agencies.

The premise is simple: you receive success-proven marketing services in exchange for revenue-sharing or low shared equity. The marketing company won’t provide you with capital; instead offering their services.

Why offer marketing services instead? Simple, it forms a partnership where both parties work together to achieve the same result: growth. If you make money, they make money from shared revenue.

Most significantly, they take an active role in the growth of your company. And given that marketing is pivotal to company growth, it’s a worthwhile agreement.

But that’s only one of the many advantages of this marketing partnership.

The Advantages of Marketing Partnerships

You’ll always maintain 100% control in this agreement than working with a VC, with the “the median and average level of VC ownership at exit was 53% and 50% respectively“.

Your focus will be growing your business while the marketing agency develops and pushes your brand in the industry. It’s a split role that works perfectly.

Considering that 54% of companies say partnerships drive more than 20% of total company revenue (Partnerize), you could see benefit from this agreement.

While VCs are known for having connections to support your business, as mentioned, they are usually investors. They’ll provide you with information and providers but won’t take an active role.

Marketing agencies, on the other hand, offer you 24/7 support as they’re invested economically (the services they use), emotionally (you win, they win), and reputationally (your success helps build their success).

You can expect everything from business development to growth strategy, from branding strategy alongside a complete marketing plan, including the likes of SEO, social media marketing and advertising. You can even get targeted campaigns that target your audience.

Once again, we’re going for this superb description of a partnership mentality from LinkedIn:

“A partner is someone who may invest either capital or time for ownership. This person should be expected to move the company forward. The challenge many partners face is that they can’t figure out or don’t want to figure out how they fit into the company. In a small business, there has to be the attitude that you will all roll up your sleeves and get things done.”

In essence, when working with a marketing company, you’re getting a partner who is committed to growing your business, taking a very proactive approach. They thrive for your success because they know it will give them success. 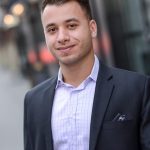 Passionate about growth, technology, and marketing, Tarek is an initiator, thought leader, and trail-blazer in the Calgary business community. Driven by a dream, Tarek founded GrowME Marketing to help local businesses grow and prosper through their online presence. GrowME is one of the fastest growing digital marketing companies in Alberta. Doubling in size since its conception in 2013, GrowME has helped hundreds of businesses reach their goals of increased online leads and more conversions. Their mission is to outrank, outsell, and outgrow the competition through website design, branding strategies, PPC Marketing, and search engine optimization. Better growth begins with GrowME.

As the founder and leader of multiple businesses, Tarek has achieved his high school dream of becoming a 'successful businessman,' but the goal doesn't end here. Speaking in front of crowds of over a hundred, Tarek continues to share his story of perseverance, inspire young people with a vision of victory, and contribute consistently to the business and entrepreneurial world.

10 Strategies to Acquire New Customers for your eCommerce Business

This article highlights ten strategies that both new and existing eCommerce stores can use to attract customers to their business.

END_OF_DOCUMENT_TOKEN_TO_BE_REPLACED

Big data is one of the emerging components of the insurtech sphere that is not widely used yet but is highly demanded.

END_OF_DOCUMENT_TOKEN_TO_BE_REPLACED

How to use Referral Marketing to Generate New Leads

Referral marketing is one of the most seamless ways to generate leads for your business.