How a Promotional Video is Made

In addition to guest posting on the UpCity blog, Minifridge Media is featured as one of the Top Video Production Companies in Canada. Check out their profile here.

There’s always been a fascination with behind-the-scenes stories from movies and TV; when it comes to commercials, however, people don’t seem to be quite as curious.

That’s a shame, because the process is similar, and just as interesting.

As someone who has written, produced, directed and edited over 100 promotional videos in the past 4 years through my Toronto-based video production company Minifridge Media, I am happy to take you through it using a real-life example of a commercial I made.

1. Figure Out the Script

When I first met with the marketing folks at Chuck’s Roadhouse Bar & Grill, a burgeoning restaurant chain in Ontario, Canada, I already had some idea of what they wanted from their commercial. This was a place to get a burger and beer and watch the game, so I figured they weren’t going to say, “Andrew, we want our viewers to well up with tears when watching the spot.”

After some discussion, we were on the same page.

The best approach would be a direct one, with some humor peppered in. I pitched them on a ‘Sam Elliot in The Big Lebowski”-type narrator, who says stuff like “rootin-tootin’’ and “yeehaw, pardner.” So, even though the visuals would be straightforward—beers, steaks, sports, good times—the voiceover would provide some laughs.

My dad has an expression that applies pretty well to video production. It’s the 5 P’s: ‘Prior Planning Prevents Poor Performance.’

Anytime you show up to a location to shoot, a lot of money is being spent, and you’ve only got one shot to get it right. Being insanely prepared helps ease the pressure.

Before anything else, you need to actually pick a shoot day, and do your very best not to change that day. You’re bringing together a huge group of professionals, all of whom are busy and in-demand, so if you move the day, you might lose some of them.

Once the day is picked, I will reach out to my regulars and tell them to hold the date. The amount of people I can bring on board is determined by the client’s budget. I’ll hire a director of photography, who comes with his own crew of lens and lighting experts (also known as 1st ACs, grips, and gaffers). I also hire a first assistant director, as well as a hair and make-up artist, and a production assistant.

For Chuck’s, I didn’t have to hire a sound recordist, because we were shooting MOS (Mute-on-Sound). But I did hire a food stylist, whose job was to arrange Chuck’s food to look as delicious as possible on camera. Sometimes they even spray this weird chemical stuff on the food to achieve the effect. It’s ironic that most of the incredible-looking food in commercials is essentially inedible as a result of its highly appetizing appearance. 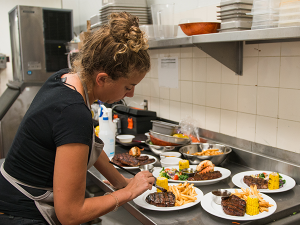 So, the crew is hired. But what are we actually shooting? Our script called for a series of interactions between Chuck’s customers. That meant casting actors to bring these customer-characters (or “customachers”) to life.

Casting is an art-form, no question. Some people have an indescribable quality that suits them to a particular role, and the casting director is the person who can see this quality within them. For instance, we had to find someone to play a server. Seems easy, right? Not so fast. Out of 100 actors I looked at, there were maybe 3 people that you would buy as servers on camera. Even actors who were servers in real life, weren’t believable as servers in a video. It’s a strange thing.

The client gets a lot of input in casting. They’ll likely leave the crew selection up to you, since they can’t tell between one gaffer and another. But they definitely want to be involved in the faces on the screen that are representing our brand. The key here is to give them options — but options that you would be happy with if they were selected. Don’t include anybody that you aren’t excited about potentially casting.

You may be surprised to find that this is by far the shortest section. That’s because of how much planning has been done beforehand. Now we carry out the plan, solve problems as they come up, and make sure everyone (especially the client) has a good time. 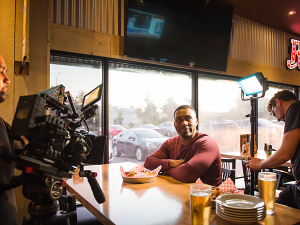 Now, we take the footage back to our office and start editing it. We get a good rough cut together and send it to the client. Eventually, after a bunch of back and forth, the final edit is settled on and locked, which is industry-speak for ‘left alone.’

Then it goes to a bunch of other talented artists who all make their own contributions, such as a colorist (who creates the final look of the piece), a VFX artist (who paints out unwanted blemishes and adds screens to TVs), a voiceover artist (who lends their gravelly Texan-accented voice to the soundtrack), and sound mixer (who blends the voice and music together seamlessly).

These artists send their work back to us, we put it together into a final version, and send it back to the client! And what they do with the video from that point is their business. We focus on what we’re good at—making cool videos—and leave the promotion part to other partners. 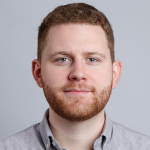 Andrew David Osborne is a Toronto-based commercial director. A life-long filmmaker, he started a video production company called Minifridge Media in 2016. His company makes commercials & corporate videos and have produced over 200 videos for 75+ clients, including multi-national corporations, restaurant chains, tech start-ups and lifestyle brands. Andrew’s work has played on national TV, in Cineplex theatres, and at the TIFF Bell Lightbox.