From the Ground Up: An Interview with Chris Alvarez of Transcendent Enterprise

In this week’s “From the Ground Up” interview, we sit down with Chris Alvarez, founder of Transcendent Enterprise, an UpCity Certified Premium Partner and one of the top video production companies in New York City. Below we discuss how he started his business while being a student, how being a minority business owner has affected his personal mission, and more! 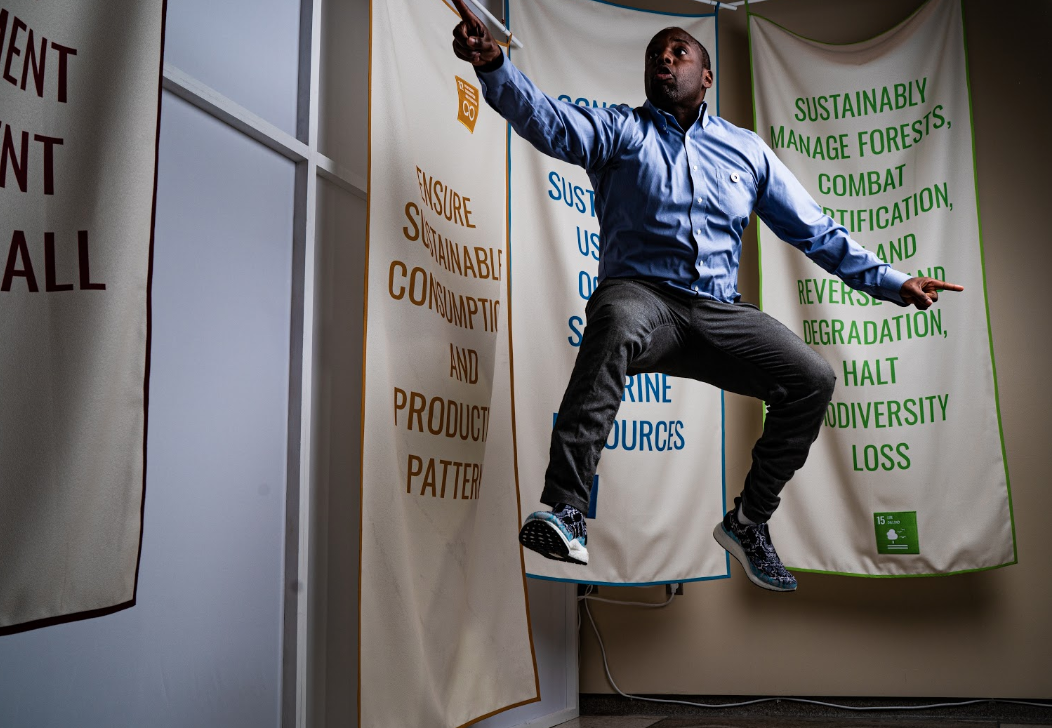 Q: Thanks for taking the time to sit down with us today, Chris. To get started, tell our readers a bit about your background and how your company got started.

A: Transcendent Enterprise started at what is now NYU Tandon. When I attended, it was called Brooklyn Polytech, but I started there in 2004 or 2005 and it was a time when a lot of people around me were starting businesses. I caught the entrepreneurship bug and decided to start a video production company because I saw that there were so many more screens being created. Flat-screen TVs, smartphones, tablets…all that was just starting to come around at that time, so I felt video was a solid investment for the future.

I had been working in video production since I was 15 at my church, so it was something I already knew how to do and could leverage those existing skills to get started. I tried other things as well; I actually tried selling sneakers on eBay believe it or not, but video production seemed like the right choice. I was able to leverage school equipment, gain clients by networking at school events, and my first office space was actually on campus in a building in Brooklyn reserved for student businesses. We moved to the city in 2011 and that’s when things really started to get going in the sense that I no longer had that cushion from the school to rely on. Fast forward a few years and here we are: one of the top video production companies in New York.

Q: I think stories like yours are hugely important for young and hopeful entrepreneurs to hear. Everyone needs a success story to try to emulate, right? I’d love to dive a bit deeper into your first few years. What was it like finishing school and trying to grow a business at the same time?

A: My mantra at the time was, “Let everybody know what you do and hopefully something will come through.” I wasn’t very picky as far as what came in either. I was really bootstrapping for the first seven or eight years and still have never had any major capital investments: it’s all been out of my own pockets, my own resources. I just got the word out there and little by little word-of-mouth started to develop.

It did help that I was part of the school. I would go to school events or go meet with department heads to try to solicit them and that’s how I started to stumble on those bigger tier projects, but at first, it was weddings, dance recitals, even funerals. I’d take any job that helped me get the business off the ground and pay the bills.

Q: What was that transition like as you moved away from taking anything that came your way and started to have more flexibility with what projects you took on?

A: It really came about once I realized the importance of my online reputation and SEO and things like that. A friend of mine from college who was my roommate started a business at the same time and I saw him do incredibly well using SEO and understanding how to market his business on the Internet. At the time, it didn’t make any sense to me: why would someone feel confident hiring someone based on just a website? Before 2011, I really wasn’t paying attention to my online presence, but once I saw my buddy’s cleaning business blow up (he’s still ranking number one or two and competing with the big names in the cleaning space in New York) I knew I had to start taking it more seriously. Once I did, it made it a lot easier for me to approach those larger projects with confidence.

I’ll admit: my web presence is still underdeveloped according to my standard. We do so many cool things as a company and I feel like a lot of it still isn’t online in a form that my audience can find. I’m working on it more and more though. It’s a process that never stops!

Q: I 100% agree. That’s interesting though that even though you didn’t necessarily invest in your online reputation early on, you were still heavily invested in word-of-mouth. I’d love to discuss your experience as a minority business owner, especially considering that you live in one of the most diverse cities in the world: New York.

A: I mean, it definitely gives me an interesting perspective. When you go out and say, “Hey, I want to start a business,” one of the hardest things is realizing how steep the learning curve is, how tall the mountain is that you have to climb to achieve success. You need things that are going to motivate you. I think one of the things that has motivated me to really push the company through some of our hardest times was the fact that you didn’t and still don’t see a lot of African-Americans (or minorities in general) in this industry. I’d see video production companies working on shoots on the street or I’d be at a high-level event/production for networking and for a long time, there weren’t many minorities being represented in the space.

That’s been a big part of my vision for Transcendent Enterprise: I want to put up a diverse team whose talent speaks for themselves. We have men and women on our team, my senior editor is from Pakistan, and my management team is from the Dominican Republic. We just pride ourselves on having a team composed of individuals from places that don’t normally see great representation in the video production industry.

I wouldn’t say that being a minority business owner has hindered my chances of success or given me any opposition, but when I think about it, there are times when I present myself in a certain way to skirt the subject a bit. I just saw an email right before this interview from someone whose signature included a pretty scary looking headshot. In my signature, I purposefully put my logo in place of a headshot so it’s racially ambiguous and allows my work to speak for itself.

Q: That’s awesome and something we definitely need a lot more of in the digital marketing industry in general. That’s why I’m so glad that we’ve been able to interview such a diverse group of business owners for this From the Ground Up series.

You mentioned that your online reputation is now critical for your business, but in the beginning, you didn’t buy into it. Besides seeing the success of your friend’s business, was there anything else that made you see the light, so to speak, when it comes to reputation management?

A: That was a huge part of it, but it also came down to what was going to be the most efficient way for me to generate leads for my business. Before, I was going out and hustling to find new business. I would do a lot of cold email outreach or I’d be out hitting the pavement and going door to door. That’s not an efficient use of my time as a business owner. I had to start treating my time as an investment and maximize my return.

Once I started to focus on my web presence a bit more, I noticed more calls coming in, more emails filling my inbox, and I picked up more business. It just started to click so I started to pivot my focus and reinvest my time.

Q: So when it comes to building your reputation, how do you go about differentiating yourself from the myriad other companies in New York that provide similar services? It’s hard enough for businesses in small towns across America to distinguish themselves from their competition, but in one of the largest and most populous cities in the world, it must feel almost impossible.

A: Living and working in New York has its positives and negatives. On the one hand, there is a lot of competition, which leads to the problem you mentioned. On the other hand, there’s a lot of work in the city, which presents a lot of great opportunities for everyone to get a piece of the pie.

At the end of the day, I think one of the most important things is just to treat every job like it’s your first and making sure you cross your t’s and dot your i’s. For me, that means I try to focus on being a good listener and try to give the clients what they want. A lot of people expect the typical ego-driven creative type, but I try to work around that. I think that’s one of the main reasons why people continue to work with us: they know they’re going to get great work and they’re going to enjoy working with us.

Q: Absolutely, and that applies to not only video production companies, but any type of business. Customers want to do business with people they like. It’s that simple!

For my last question, I want to chat briefly about your relationship with UpCity. How did the partnership begin and what has kept you around?

A: You know, really the answer for me is if you search “video production in” almost any city, UpCity is the first to come up. That’s what attracted me to see what you guys were all about and eventually become a part of your Marketplace. The fact that you guys create awesome content like this and that your platform helps me generate great reviews has been huge as well.

Q: That’s great to hear! Thanks again for taking the time for this interview.

A: My pleasure. Thanks for having me.

Chris Alvarez is the founder of Transcendent Enterprise, a video production services company. Chris leads the company to offer premium professional services such as pre-production, post-production, and live streaming needs.

The Transcendent Enterprise team has worked with prestigious clients such as Sony BMG, spearheading projects with Lil Wayne of Cash Money, Usher, and Nelly. Those opportunities have opened the doors to do documentaries with artists like Master P and Rick Ross. They received press from the national TV show The Insider, Huffington Post, and NBC’s The Root. Currently, team Transcendent is working with clients such as Facebook, NYU, Wells Fargo, HBO, the New York Knicks, and the city of New York.

Transcendent is a minority-owned company and is certified by NSMDC and the city of New York.

Why Networking on LinkedIn is More Important Than Ever

Building and interacting with your community on LinkedIn’s platform, which is inherently built around facilitating such connections, should be a central component of your weekly routine.

How to Network When There Are No In-Person Networking Events

The challenge has more to do with finding where to look for high-quality and reputable events that you know will provide value.

What experts can agree on is that 2020 couldn’t be considered as anything approaching an ideal year for the marketing and advertising industry. But as we take our initial careful steps into 2021, you can almost hear the collective sigh of relief.