In addition to guest posting on the UpCity blog, Inspire Visual is featured as one of the Top Mobile App Developers. Check out their profile! 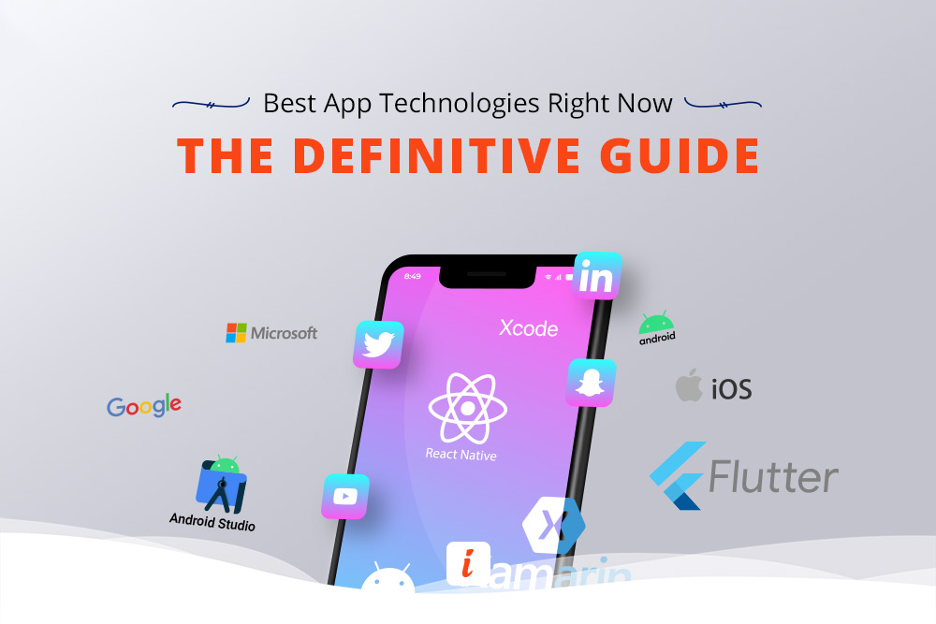 With so many different technologies for developing apps today, it’s easy to get lost when deciding what’s best to use.

You need to consider the pros and cons of each app development technology in relation to the goals of the app you’re developing.

We’ll detail out the options and pros and cons in this article to help you make the right decisions. 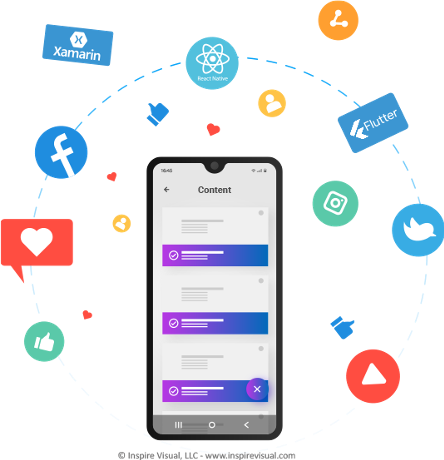 Before building an app, you have to decide if a web app, progressive web app (PWA), or native app will be the best option for you.

The most popular app technology is by far a native app, and those are the ones we typically build for our clients.

We should mention that native apps also have sub-categories: fully native apps (built for a single platform) and cross-platform apps.

Web apps are just mobile responsive websites. They are dependent on being accessed through a browser and therefore are limited by the browser’s capabilities.

Since web apps work via a web browser on the smartphone, they require a cell signal or wi-fi to function properly. There is also tight security on access to mobile hardware.

This means web apps don’t have access to certain features, many of which can drive customer engagement and conversion, like offline support, push notifications, Bluetooth, smart assistants (Bixby and Siri integration), and other native-like features that users have come to expect.

Due to the lack of mobile hardware access, data presented in the app must be fed in by back-end APIs; for example, storefronts rely on back-end servers to feed images, text, and the payment gateway.

Progressive Web Apps are a cross between a mobile website and a native app, allowing them to take advantage of both web and native app features. Another commonly used name for these is Hybrid Apps. They are built with HTML, CSS, and JavaScript, but are more advanced than their Web App counterparts.

A great feature PWAs have that web apps don’t is the ability to add the app to the home screen. They run in the browser, but once saved to the home screen, they function much like a native app. That means PWAs have access to the native hardware like the camera, microphone, photo library, and GPS location — basically, features the browser would not be allowed to access for security reasons. Another great benefit is that app developers can push updates to PWAs, much like a native app.

There are limitations on PWAs being able to access hardware features depending on whether the app is Android or iOS, but these are not as strict as they are for web apps. For example, support for camera features is only partly supported on iOS. Another example is Push notifications – they work great on Android but are not supported on iOS.

Google is pushing for PWA support on Android and features are widely supported. Apple has always been a more closed system in part due to security, so features are much more limited on iOS.

Third-party browsers on mobile platforms, such as Firefox and Edge, also have their limitations.

Here’s a site that provides in-depth information about what is and isn’t supported in PWAs.

A native mobile app is installed directly on the smartphone and can work with no internet connectivity, although how much content can be accessed offline may be limited and is dependent on how the app is built.

Native apps are the ones you know from Google’s Play Store and Apple’s App Store. With over 4.35 million apps in their combined library, they are by far the most popular option of the three types of apps we’ll discuss.

There are several ways to make native apps: either by targeting the platform itself (Android or iOS) or by developing a cross-platform solution that works on both using one codebase.

These apps have full access to native features on the mobile or tablet they are installed on. To gain this trust from Google and Apple, all native apps have to go through a review process before being published. This is a short process that typically only takes about a week. 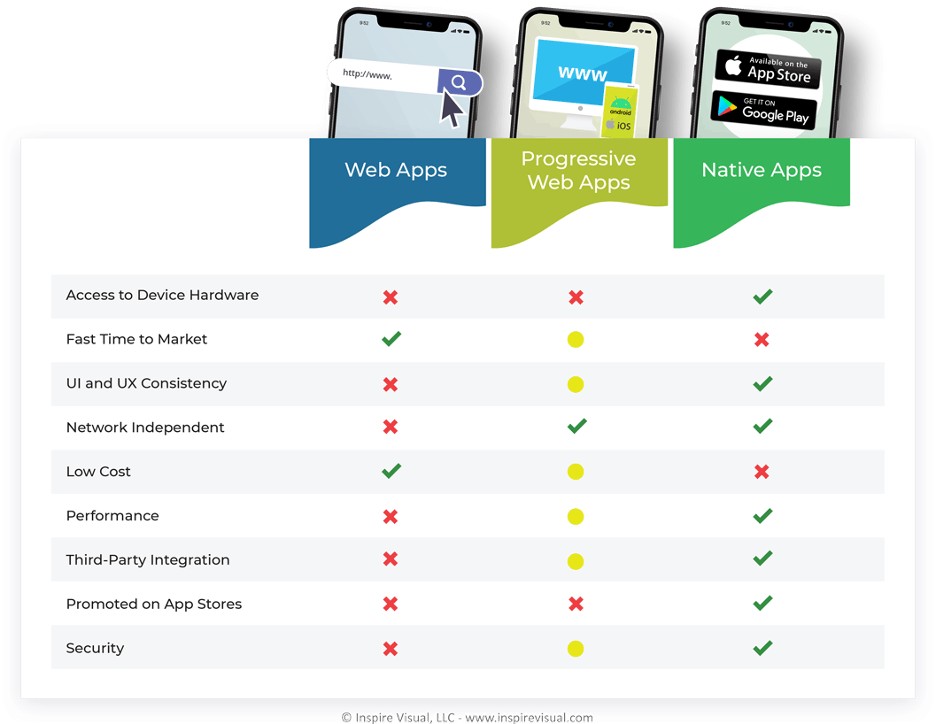 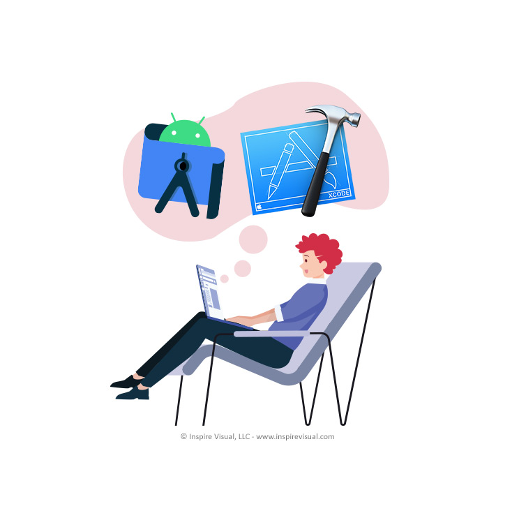 In the earlier days of app development, apps used to be built with a codebase for each platform. Essentially, you would build an app for Android and another app for iOS in their native SDKs (software development kits).

Those days are mostly gone with the introduction of strong cross-platform development kits, so is there still a reason to develop a single-platform native app?

Oftentimes the answer is no; however, below we explain some advantages that still make single-platform native app development desirable.

The differences are becoming less noticeable with powerful cross-platform development kits maturing, but there are times you might want to consider developing a single-platform native app.

If you want to get in-depth information about the SDKs for each platform, you can get more information from Google’s Android Studio here or Apple’s Xcode here.

Here are some pros and cons of building an app for only one platform:

When it comes to building the best performing, best UI/UX interface, and most new feature compatible app, single platform is the obvious choice. But as you will learn in chapter 3, there are also great cross-platform SDKs available that now have almost all of the advantages that fully native apps have (with few of the disadvantages remaining). 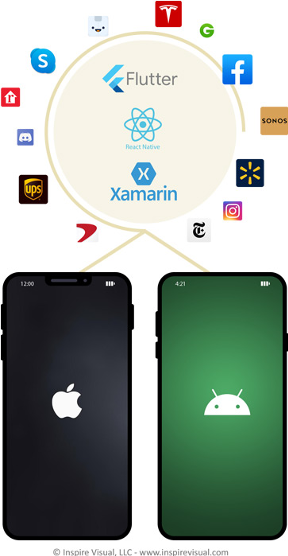 Cross-platform mobile app development allows you to build just one code-base for Android and iOS instead of building a code-base for each and essentially doubling the work.

This option saves on development cost and time if your goal is to release your app on both Google’s Play Store and Apple’s App Store. It also makes for a unified UI/UX experience coming from Android to iOS and vice versa as the interface will be identical.

Its programming language is called DART; built from the ground-up with a focus on a seamless UI experience between Android and iOS as well as optimized and fast code output. While being difficult to compete with truly native built apps in terms of speed and smooth performance, Flutter is shining among the cross-platform options and a worthy candidate.

React Native is another big player in the mobile app development market. It was created by Facebook in 2015 and was made to be a replacement for building Facebook in HTML. Once it was available for public use, it quickly became widely popular as a cross-platform development kit.

The programming language used is JavaScript and its framework is compatible with a large library of 3rd party plug-ins.

Xamarin is the oldest and first cross-platform mobile app development framework of the three app development kits. It was the first framework that allowed developers to make apps that look almost like native Android and iOS apps. Its performance is also outstanding running at nearly native speed.

Flutter vs React Native vs Xamarin 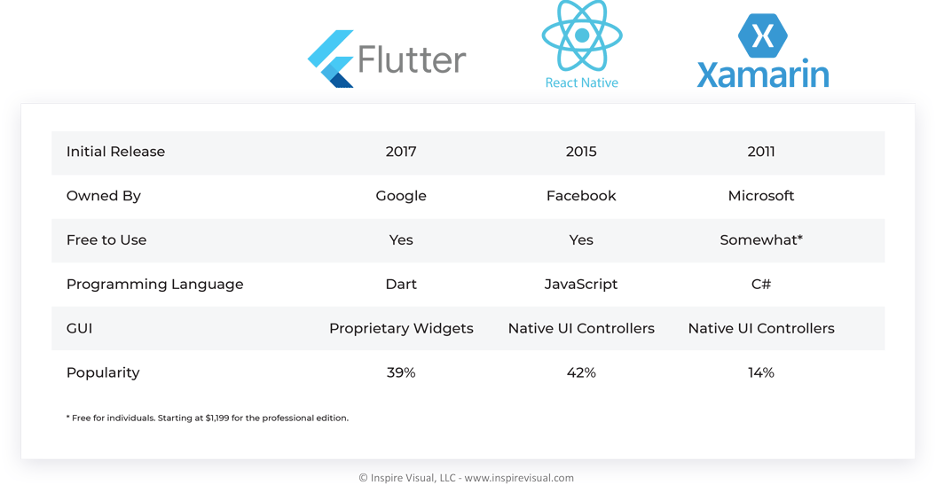 Recommending one app development method over another is difficult since it really depends on the needs of your app. For example, social apps packed with features will have different requirements than a gaming or financial app.

Generally, both Flutter and React Native come out ahead of their older counterpart, Xamarin. While Microsoft is a large well-established company, its market is much more diverse than Google and Facebook, and it seems their focus on their app development kit is not as strong as Facebook and Google’s.

We hope this article has given you a good overview of the technologies available today.  Now that you have an idea of which mobile app development framework will work best for you, it’s time to start thinking about the rest of the app development process!

From there, he interned at Grey Interactive in Denmark, owned his own company developing interactive CD-ROM productions and also developed children’s educational CD-ROMs while at PinPoint Multimedia.

Michael has worked as an Art/Creative Director at multiple agencies owned and operated a successful freelance creative business for many years before founding Inspire Visual.

How Businesses Can Leverage IoT in 2021