A Guide to Pre-Development Marketing for Med-Tech

In addition to guest posting on the UpCity blog, Big Buzz is featured as one of the Top Healthcare Digital Marketing Agencies in North America. Check out their profile here.
When devising an approach to selling your medical device, it’s imperative that marketing efforts stay at the forefront of the process from the earliest possible stage. Pre-development marketing can help poise your product for success before it’s even been constructed!
Much of these efforts are focused on generating interest, excitement or buzz. You may have seen these pre-development strategies employed by major companies like Apple and Google, but they can also be utilized in the med-tech industry.

Consider posting anticipatory posts through your various channels in anticipation of the product. Posting in med-tech industry publications and advertising on popular industry sites is a good way to stimulate word-of-mouth buzz. You may also consider leaving an air of mystery about specifics to have the intrigue spark even more interest.
Therese Palmere of New York-based digital marketing agency Aumcore advises,

“Remember this is a pre-marketing strategy. You don’t want to give away all your cards at once! For now, start to familiarize your users with the concept of your new product. Tease your audience by making posts and sending emails that leave hints on what your product can do. Don’t reveal anything too concrete, instead show your users your product’s potential.”

Piezosurgery Inc., a division of mectron, is a shining example of pre-launch marketing. They are a leading manufacturer of piezoelectrical surgical systems who contracted a full-service marketing team to help them construct branding and messaging to promote new products prior to launch. They used this messaging to create consistently voiced marketing materials which helped drum up awareness across multiple channels with a single and unified approach. They let their key differentiators and sleek aesthetics do the talking over raw data and specs.

To this end, consider developing a timeline that details not only when you will post, but also how you will frame the product and how much information you will provide at each stage.
Creating this timeline is beneficial on two levels: not only will those in your industry and your potential customers stay engaged due to the crescendo of information, it also helps your development team stay aware of where they need to be in bringing the product to market.

Another potential pre-development marketing tactic to consider is to take preorders for your product. This can help generate early revenue that can greatly contribute to the marketing push as development continues and once your product has officially launched.
Fitbit founders James Park and Eric Friedman raised funds and marketed their product prior to launch by taking preorders at the TechCrunch conference in 2008; they wound up taking 2,000 preorders, and the direct-to-consumer sales model allowed for high profit margins. They leveraged this early premarketing success to expand and become the ubiquitous, widely-distributed brand they are today. Smaller firms might also consider crowdsourcing: presenting a product they intend to build with the help of customer funding.

Be Careful What You Claim: A Lesson from Theranos

While pre-development marketing is essential to the success of a new med-tech venture, it’s critical not to put the cart before the horse by placing more importance on hype and marketing than the product itself.
A recent example you may have heard about is the Theranos scandal. To summarize, Silicon Valley startup Theranos’ CEO Elizabeth Holmes and president Sunny Balwani brilliantly marketed and promoted what was essentially a sham product. Their new blood testing technology was supposed to analyze small amounts of blood in a desktop-sized machine called an Edison; in reality, they were simply testing normally sized samples by conventional, existing methods.
While they ostensibly believed that their technology would be capable of doing what they promised at some point down the road, they knowingly misled investors and the public at large about its current capabilities. Their pre-development marketing was spectacular, their product (and ethics) were not.
In the highly competitive world of med-tech, it’s critical that organizations hit the ground running in their marketing efforts. Waiting until a product is rolled out to execute a marketing strategy simply isn’t sufficient. Luckily, by keeping in mind that marketing begins well before launch, and by implementing the strategies described in this article, your organization can stay a step ahead of the competition while positioning your new product for success. 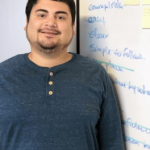 Born in Chile and raised in Western New York, he moved to Colorado to finish his education, graduating from Metropolitan State University with a degree in Marketing. Evan uses his passion for writing to create exciting and engaging content for every variety of client while staying true to the voice of their brand.

The Shift to SMS: 3 Reasons Why People Have Their Phone Numbers on Instagram