In addition to guest posting on the UpCity blog, The NALA is featured as one of the Top Advertising Agencies in the United States. Check out their profile!

One of the first expenses businesses mistakenly seek to cut during an economic downturn is in the marketing and advertising budget. While it seems reasonable for companies to save money and be more prudent in uncertain times, spending more money on advertising during a crisis or recession can have a significant impact on driving up sales and increasing market share.

Here are five reasons why increasing advertising budgets during a recession will result in increased business sales and market share.

In 2009, which was the last year of the Great Recession, U.S. spending on advertising dropped 12% overall. The biggest hit to advertising was with newspapers, which saw a 27% drop that year. Radio spending reduced by 22%, magazines declined by 18%, out-of-home by 11%, television by 5%, and online by 2%. Companies who increase their advertising budgets during a recession, when advertising is less expensive overall, can see a greater return on the investment.

2. When Other Businesses Cut Back on Advertising, It Frees Up Space for Your Message

Most small businesses have a limited advertising budget, even in a thriving economy. When many companies are looking for ways to cut costs to thwart a loss in revenue during a recession, they try to make up some of those dollars by cutting back on advertising. However, all that really does is open up the marketplace for that company’s more savvy competitors. Therefore, smart businesses that advertise when others are pulling back are more likely to be noticed than the competition because there are fewer ads in the marketplace.

3. A Weaker Economy Gives Businesses an Opportunity to Advertise a New Brand Image or Introduce a New Product

In the late 1920s, two companies, Kellogg and Post, dominated the dry cereal market. But when the Great Depression hit, Post significantly cut back on its advertising budget while its rival Kellogg doubled its advertising spend and introduced a new product called Rice Krispies, featuring the infamous “Snap,” “Crackle,” and “Pop.” As a result, Kellogg’s profits grew 30% and it has maintained its position as a leader in the marketplace ever since.

Amazon sales grew 28% during the 2009 recession because it appropriately responded to the slumping economy by continuing to innovate. It introduced Kindle products to provide a lower-cost alternative to cash-strapped consumers. By Christmas Day in 2009, Amazon customers purchased more eBooks than printed books, which gave the company an advantage because it grew the market share and stuck in the minds of consumers.

4. Brands Project an Image of Corporate Stability When They Advertise During Economic Uncertainty

Before the 17-month recession caused by the energy crisis in 1973-1975, Toyota Corolla trailed only Honda Civic in the U.S. government’s first miles-per-gallon report. Toyota was selling anything it could produce, so when the economy took a downturn, the company resisted the temptation to reduce their advertising budget. Toyota stuck to the plan to build its brand and products for the long haul. As a result, it projected an image of corporate stability and surpassed Volkswagen in 1976 as the top imported car and never looked back.

5. Consumers are More Likely to Remember Businesses Who Advertise During a Recession

When a business reduces its ad spending, the brand loses its “share of mind” with consumers. Pizza Hut and Taco Bell took advantage of McDonald’s decision to reduce its advertising and marketing budget during the 1990-1991 recession. As a result, Pizza Hut sales increased by 61%, Taco Bell sales grew by 40% while McDonald’s sales declined by 28%. Trusted brands and products that advertise during trying times give worried consumers a safe and familiar choice, and when those brands use reassuring messages that reinforce an emotional connection it demonstrates empathy. Back up the empathetic message with actions that demonstrate your business is on the customer’s side while reminding customers that buying your product is a solid decision.

Businesses are missing out on a huge opportunity to solidify their brand, increase sales, and expand market share when they cut back on their advertising during a recession. However, the wisest businesses that maintain or increase their advertising are more likely to be noticed when everyone else stops marketing and there are fewer ads in the market. The result is likely an increase in sales and market share during the recession and for years after.

Sam Walton, the founder of Wal-Mart was once asked, “What do you think about a recession?” He responded, “I thought about it and decided not to participate.” Businesses who don’t reduce their advertising budgets are more likely to get out of the recession stronger than before. So the next time your business is deciding which areas to cut during a recession, remember these words: Don’t participate. 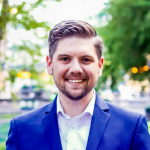 Tom Elliott is a founding partner of Acacia Consulting Group, located in Chicago, Illinois. He has more than ten years of experience working as a communications and media consultant for a range of clients, including political candidates, advocacy campaigns, non-profit organizations, and small and medium-sized businesses.

Choosing Between Display and Search Campaigns